Top 10 Most Beautiful Places On Earth To Visit

Great Blue Hole, Belize is among the topmost beautiful places on earth to visit.

It is positioned near the center of Lighthouse Reef, a small atoll 70 km from the mainland of Belize City. This hole has a circular shape of over 300m across and 108m deep.

The Great Blue Hole is a very huge submarine sinkhole off the coast of Belize.

Why You Should Visit Great Blue Hole

9. The Great Wall of China

The Great Wall of China which is one of my favorite sightseeing is a series of fortifications made of stone, tamped earth, brick, wood, and other materials. It is positioned along an east-to-west line across the historical northern borders of China.

Why You Should Visit the Great Wall of China Machu Picchu is an Incan citadel situated in the Andes Mountains in Peru, above the Urubamba River valley.

It was built in the 15th century and was later abandoned. It’s known for its sophisticated dry-stone walls that fuse huge blocks even without the use of mortar. It’s an intriguing building that plays on astronomical alignments and panoramic views. Its exact former use remains a mystery.

Why You Should Visit Machu Picchu

Taj Mahal is an ivory-white marble mausoleum located at the south bank of the Yamuna River in the Indian city of Agra.

Mughal emperor, Shah Jahan, commissioned the Taj Mahal in 1632 to house the tomb of Mumtaz Mahal, his favorite wife.

Why You Should Visit Taj Mahal

Bora Bora is encompassed by sand-fringed Motus (islets) and a turquoise lagoon guarded by a coral reef, it’s prominent for its scuba diving.

Additionally, it’s also a popular destination and luxury resort where some guest bungalows are perched over the water on stilts. From the center of the island rises Mt. Otemanu, a 727m dormant volcano.

Why You Should Visit Bora Bora

The United States is another amazing country that houses one of the world’s coolest places on earth.

Antelope Canyon is a slot canyon located in the American Southwest. It is situated on Navajo land east of Page, Arizona.

Why You Should Visit Antelope Canyon

Another place on our list of the topmost beautiful places on earth to visit is Antarctica. It is the southernmost continent and the site of the South Pole is almost uninhabited due to the ice-covered landmass.

Lots of the cruises to the continent visit the Antarctic Peninsula, which stretches toward South America.

Why You Should Visit Antarctica

The Great Barrier Reef in northeastern Australia off the coast of Queensland is the largest living thing on Earth. It’s even visible from outer space.

The 2,300km-long ecosystem includes thousands of reefs and hundreds of islands created from over 600 types of soft and hard coral. It houses countless species of colorful fish, starfish, and mollusks, including turtles, sharks, and dolphins.

Why You Should Visit The Great Barrier Reef

The Grand Canyon in the United States is a steep-sided canyon carved by the Colorado River in the state of Arizona in the U.S.

Why You Should Visit Grand Canyon 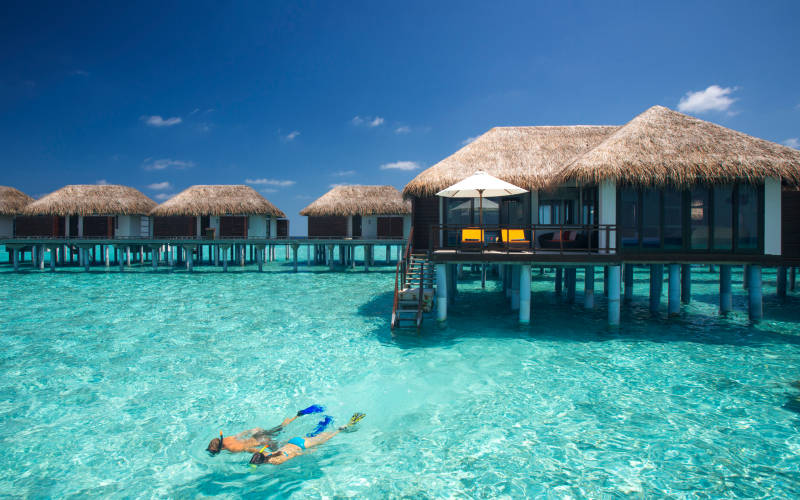 One of the best places you can think of is ‘Maldives’. It’s a tropical nation in the Indian Ocean consisting of 26 ring-shaped atolls made up of more than 1,000 coral islands.

It is well known for its blue lagoons, beaches, and extensive reefs. Malé is the capital and has busy restaurants, fish markets, and shops by the main road, Majeedhee Magu, and 17th-century Hukuru Miskiy (AKA “Friday Mosque”) made of carved white coral.

Why You Should Visit Grand Canyon

With the night beach parties, underwater nightclubs, and bars, Maldives is also the best destination for vibrant nightlife.